Inspired by Yariv’s Blog, where he talks about a framework for building web applications in Erlang, and my so far abortive attempts to get into Erlang, I decided to give it another go with Erlyweb. Erlyweb depends on YAWS (Yet Another Web Server), however, and this proved to be a bit of a pain to install since I’m being difficult and using Windows on my development machine. So, in order to help any other lost souls who try to duplicate this feat in the future, I’m recording the process (tested against YAWS 1.68): 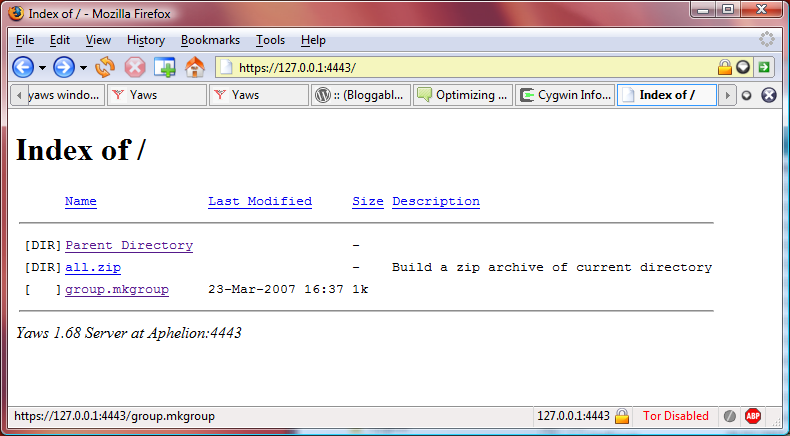 Nice page. I should have done this also when I installed yaws on Windows last time, but you saved me now. Thanks.
There was one additional thing that I needed to do to get it working. Just in case if someone else comes up with the same issue. I needed to fix yawsdir variable from the yaws-X.XX/bin/yaws file to be C:/yawsdir or something that fits your system.

Thanks for a spot on explanation!
I'm in the same position as you - just starting to learn Erlang - but most interested ultimately in it being able to run on Windows (for legacy reasons).
I followed your instructions and there was only one thing different in my process: since my ~ dir is not under c:\cygwin all the paths in yaws.conf looked like: /cygdrive/c/somewhere/or/other
so instead of being able to simply prepend c:/cygwin instead I had to make some slight changes - drop the leading /cygdrive/ and turn the c/ into c:/
Thanks again!