Do children make you happy? This is a question that anyone who is considering starting a family should be asking themselves. Among my peers there is a widespread assumption that children are a key ingredient in a happy middle age, but it’s never been clear to me that this is so.

I’m at a time in my life where this has become a useful question to answer, so I turned to the same place I look when I want to know the actual truth about any issue of substance: Google Scholar.

In the pro column, you might expect children to make you happier because:

These are all compelling reasons for procreating improving happiness, but you can also make the bear case for childbirth:

What does the evidence say? It would be misleading to simply compare the reported happiness of people with and without children, because it could be that people without children are naturally more unhappy for unrelated reasons – for example, because they tend to be poorer, and are less likely to be in long-term relationships. Or, it could be that those who have children are unusually happy for unrelated reasons: e.g. they may be recently married and in an unusually financially stable position (which is what precipitated the decision to give birth in the first place). To address this, there are essentially two approaches:

I think the most compelling evidence comes from the event studies. Comparing self-reported happiness with a previous report from the same person is a very robust control for unmeasurable individual effects, such as a genetic predisposition to be happy.

The most careful event studies I could find in the literature actually couple the longitudinal approach with additional controls for other variables that might explain happiness. This analysis suggests that the happiness change around childbirth is positive, but that these gains disappear entirely within a year: 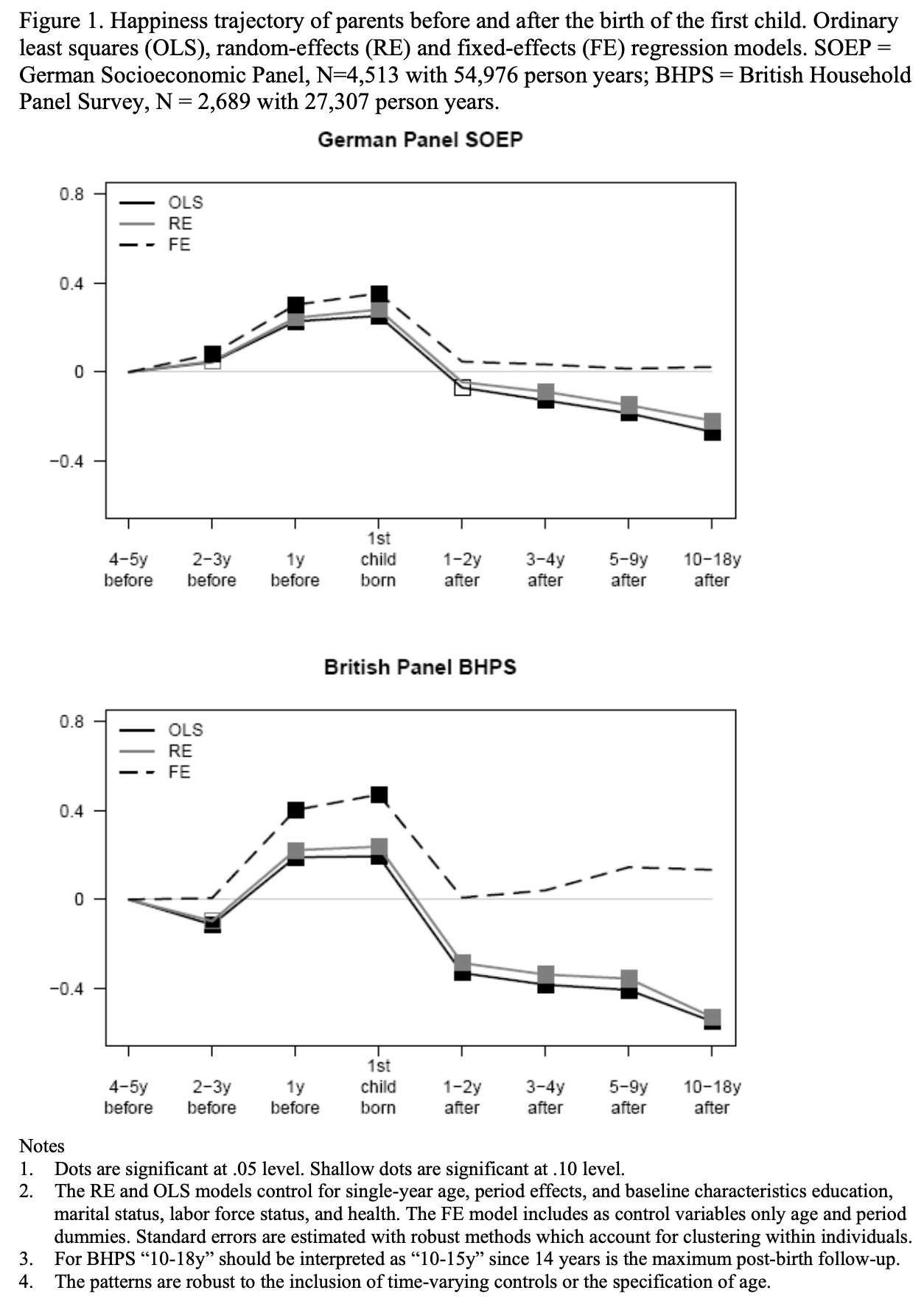 This effect is fairly large: on their scale, a 0.5 point decrease is comparable to the negative effects of losing your job, so a 0.5 point increase around childbirth is certainly nice to have!

Another study investigates the effect of having children cross-sectionally, comparing self-reported happiness in pairs of monozygotic twins. The use of twins provides a strong control for unobservable genetic variation, which the study authors couple with controls for a number of other factors. They find a striking pattern where being in a partnership is strongly associated with life satsifaction, but having children does not have a clear additive effect: women’s happiness increases, but men’s does not. This chart shows the additive effect on a scale with 0 = not particularly satisfied, 2 = very satisfied: 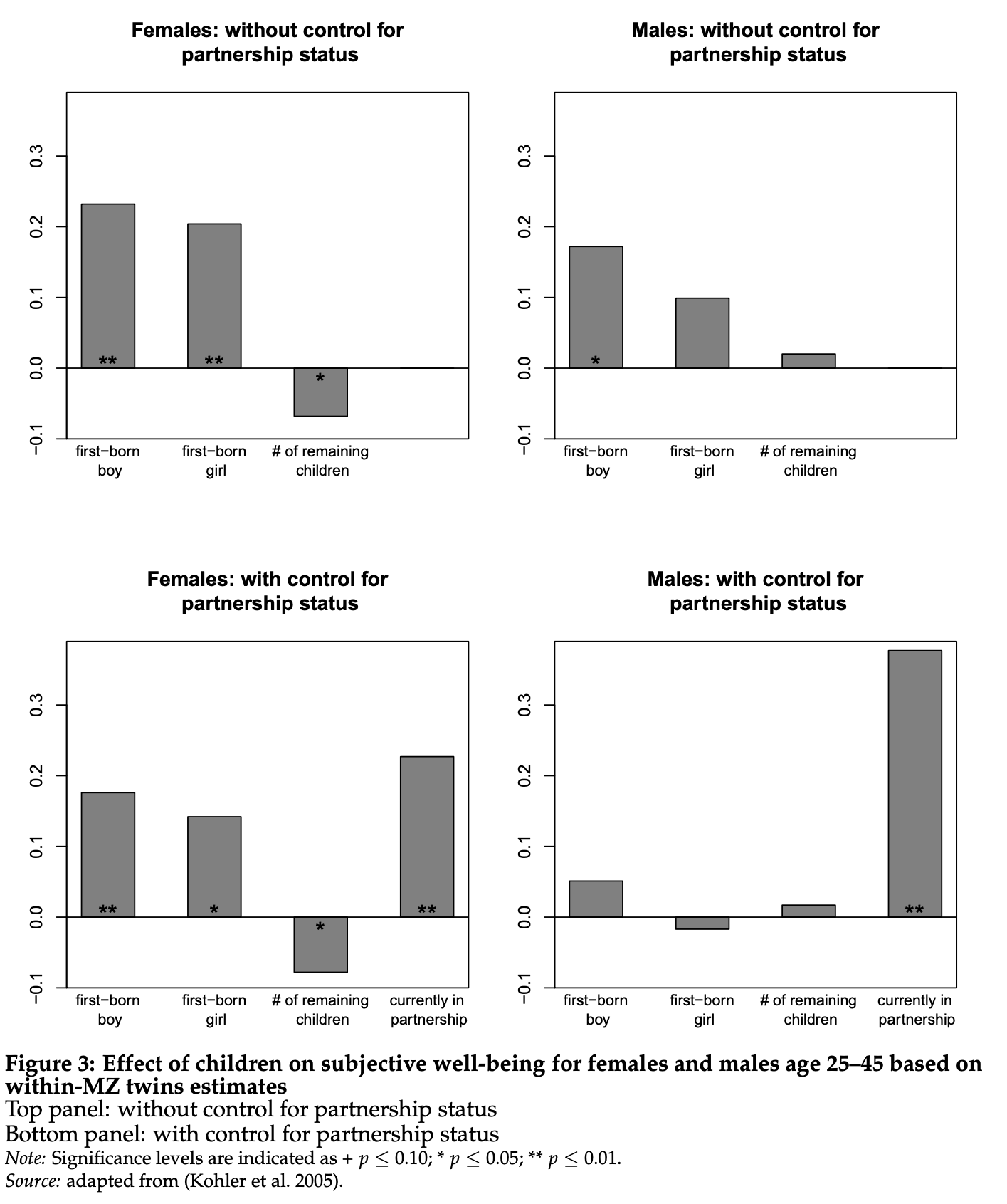 This twin study does not look at the number of years since childbirth, so it’s possible that the improvement in female happiness occurs only in the year of birth, which would make these results match the time-series evidence from the event studies. Consistent with this idea, the study finds that having children does not significantly affect the subjective well-being of either male or female twins aged 50–70 years.

Another interesting way to test the childbirth-happiness effect is via a natural experiment. Couples that require IVF to give birth will have the IVF treatment fail or succeed for reasons that are uncorrelated with non-parenthood-related determinants of later happiness. One Danish study exploited this to show that there was no significant difference in depression or divorce rate in the 10 years following IVF treatment between couples who do and do not have children as a result of that treatment. In fact, the data suggest that children perhaps cause increased depression in every year after the birth year: 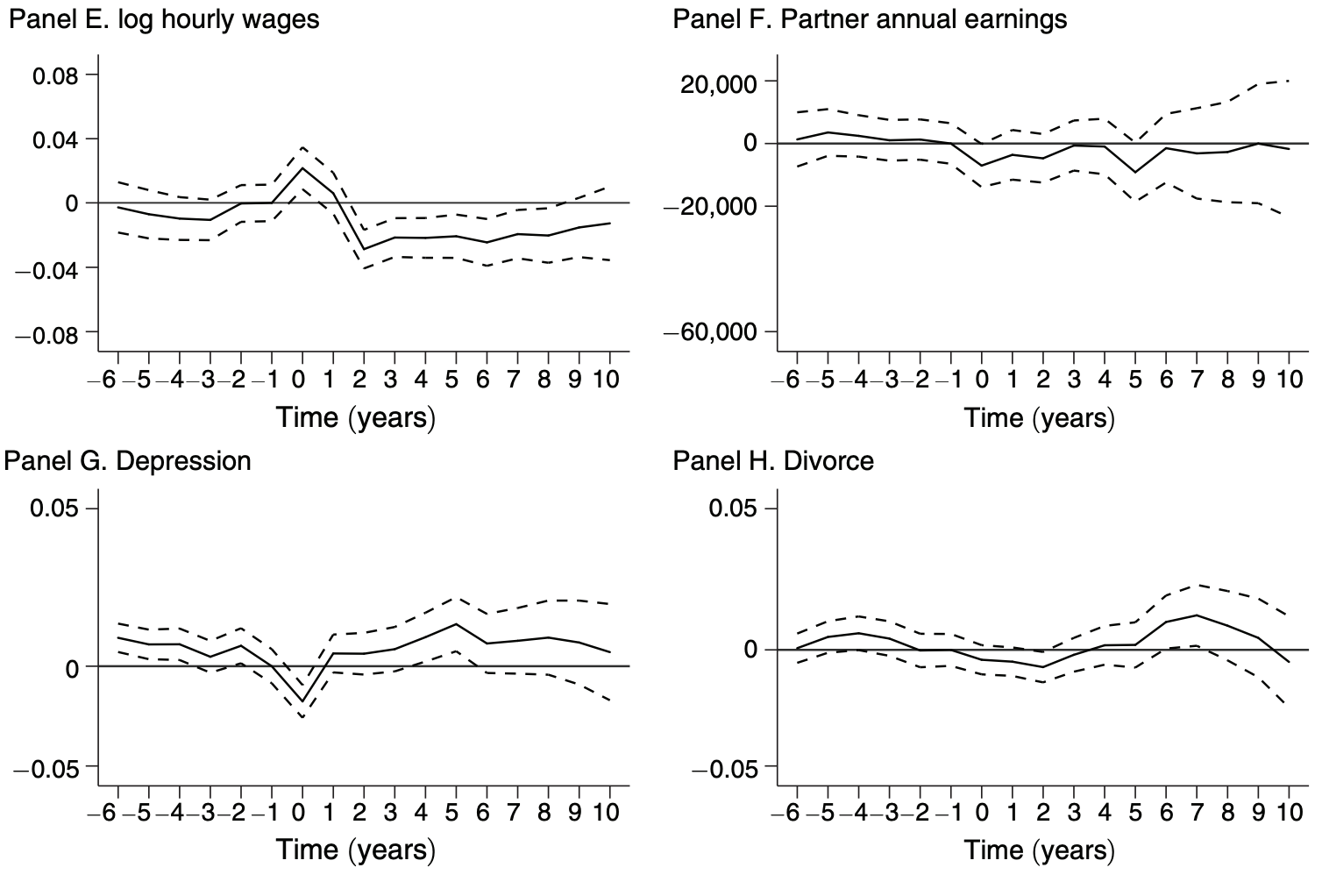 All in all, the evidence seems clear that children do not increase you happiness more than very temporarily. What’s more, none of this addresses the concern that the people who do choose to become parents may be exactly those whose who will benefit from it. For example, if you have always had an image of yourself as a mother, then fulfilling that goal will make you happy (albeit temporarily). However, if you have always been indifferent to the idea, then you may find that even this temporary boost in happiness fails to materialise. I think this argues that if you are in enough doubt about whether to have children to read this blog post, you should expect improved happiness for even less than the 1 year that the evidence suggests is the average benefit.

These studies only consider your happiness over the first 18 years of a child’s life, where they are likely to be living with you. Perhaps substantial gains to having children accrue much later in life, when you are free to enjoy their company without experiencing many of the negatives? There is less evidence on this due to the very long horizons involved, but looking at the simple average happiness by age for both the childless and parents of children in German data, it seems that there is no particular difference: 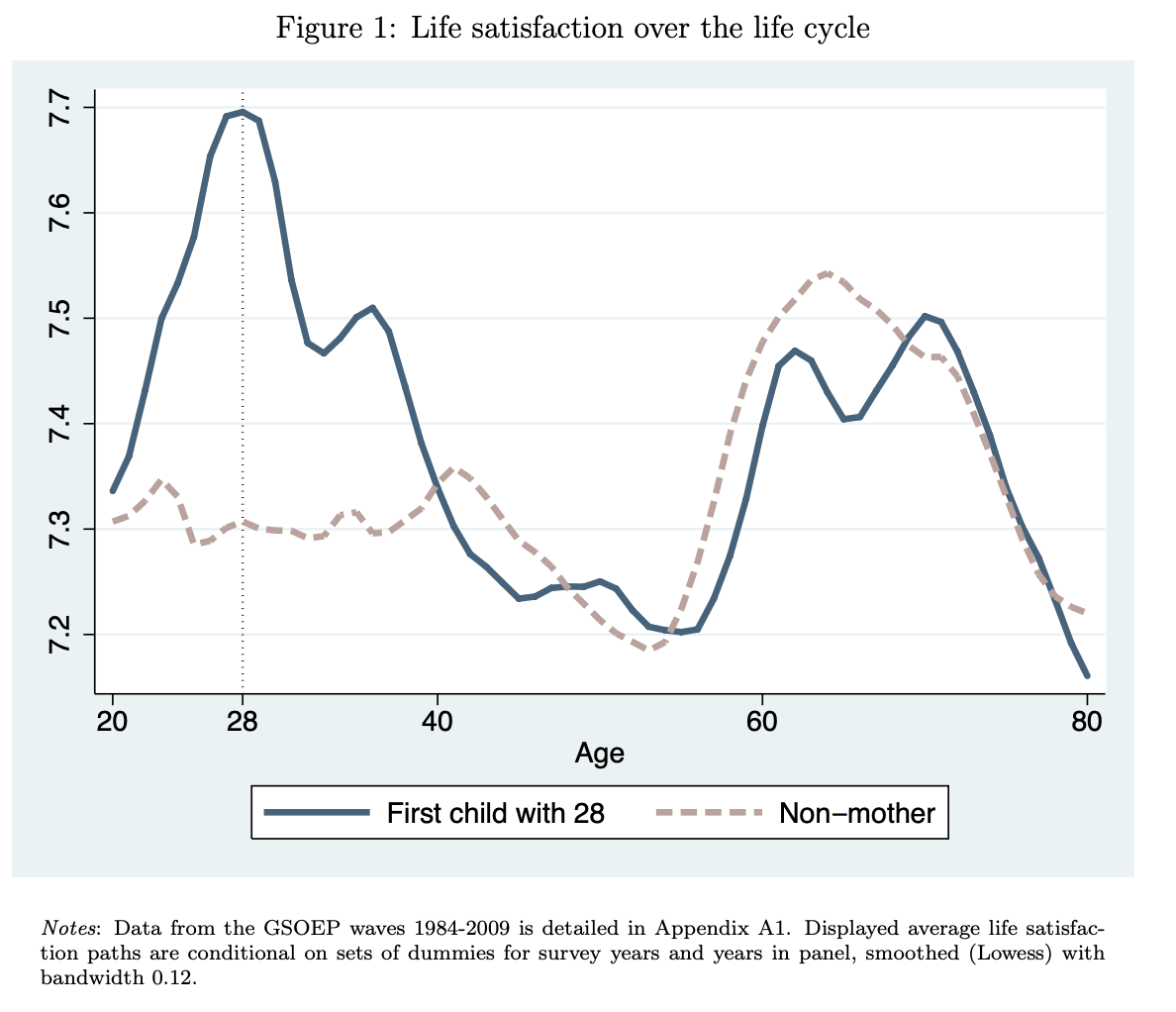 There are several other reasons to believe that improved happiness will not manifest later in life. Studies studies suggest that parents reported well-being actually improves once adult children leave the home, and that all types of parent, including “empty nest” parents, are at least as depressed as equivalent non-parents. Childless elders are just as embedded into their communities as parents, rarely express regrets about not having had children, and frequency of interaction with adult children has no bearing on adult happiness. Basically, there also seems to be no evidence that children contribute to happiness in old age.

Going into my literature review, I didn’t have any clear view on whether children improved happiness. I was actually expecting to find a positive effect of having children, consistent with “folk wisdom”, and so was rather surprised by the strength of the evidence against the idea: this is not at all what I found. There may be many fine reasons to have kids, but the selfish hope for a boost in happiness is not one of them.