One reason to believe that Bitcoin is a poor investment is because it is a rather volatile asset. As a general rule, “lottery like” assets with high variance in their valuations are known to underperform low-risk equivalents:

All these effects are violations of academic expectations about investor rationality & efficient markets. It is believed that they come about either due to irrational investor demand for lottery-like payoffs, or as a rational response to leverage constraints.

One way that academics measure these effects is to construct “factor returns” that are the weighted average of the returns of other assets. For example, you might construct the factor returns to “quality” by working what you would earn if you took a long position in the stock of companies with low year-to-year variation in earnings, low debt, and strong earnings growth, while shorting debt-ridden shrinking companies with no earnings consistency. By averaging the returns of many stocks you ensure that the factor return is unrelated to the return of any one stock, and it just captures the part of the return that can be explained by “quality”. Of interest to us, the quantitative fund manager AQR publishes two factor return timeseries that might plausibly by related to the returns on lottery-like assets:

Each of these hypothetical investment strategies shorts assets with lottery-like characteristics and consequently have strong (before-cost) returns: 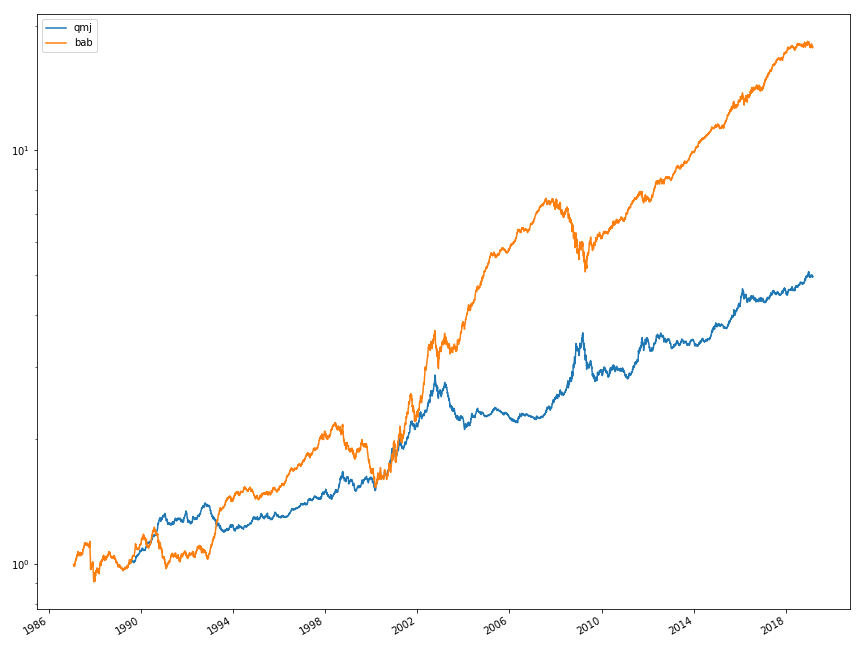 So, is Bitcoin a junky lottery ticket with poor prospects for the future? One way to test this is to check whether the price co-moves with other junky assets. I correlated Bitcoin returns 2013 to date with those on various other assets: 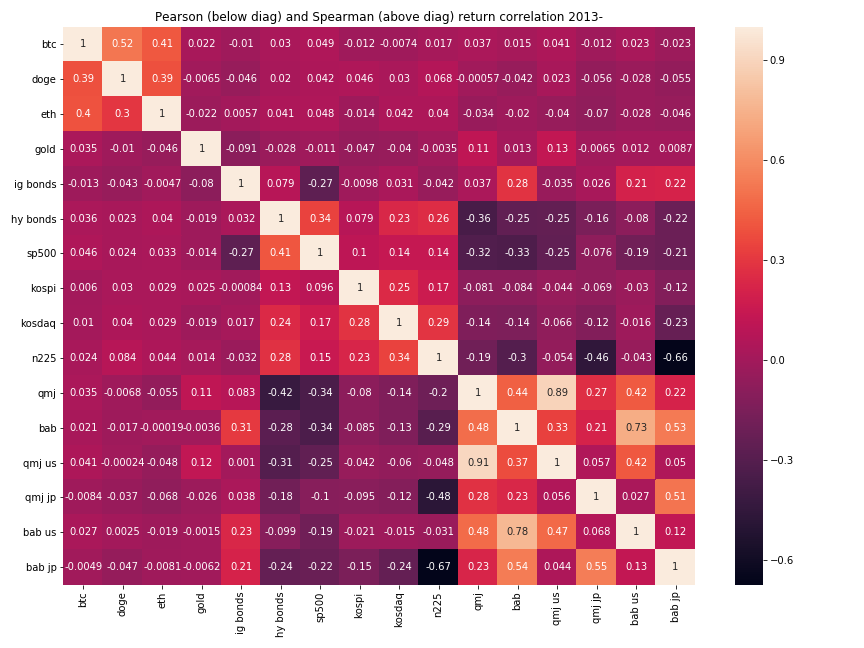 This suggests that cryptocurrencies are remarkably uncorrelated with almost any other assets. In particular, there is no particular correlation with junky assets or BAB/QMJ. This is good news for those worried that Bitcoin is valueless because it is a lottery, but by the same token, it is bad news for those who think Bitcoin is valuable because it is “digital gold”: there is no correlation with high-quality assets such as the precious metal or investment grade bonds.

The correlation between Bitcoin and DOGE is particularly interesting. Dogecoin is a junk asset because no-one believes it is valuable, not even the creators, so the fact that Bitcoin correlates with it could suggest that Bitcoin also has junk characteristics.

The picture does not change much if we restrict just to correlations during the 2018-2019 crypto bear market: 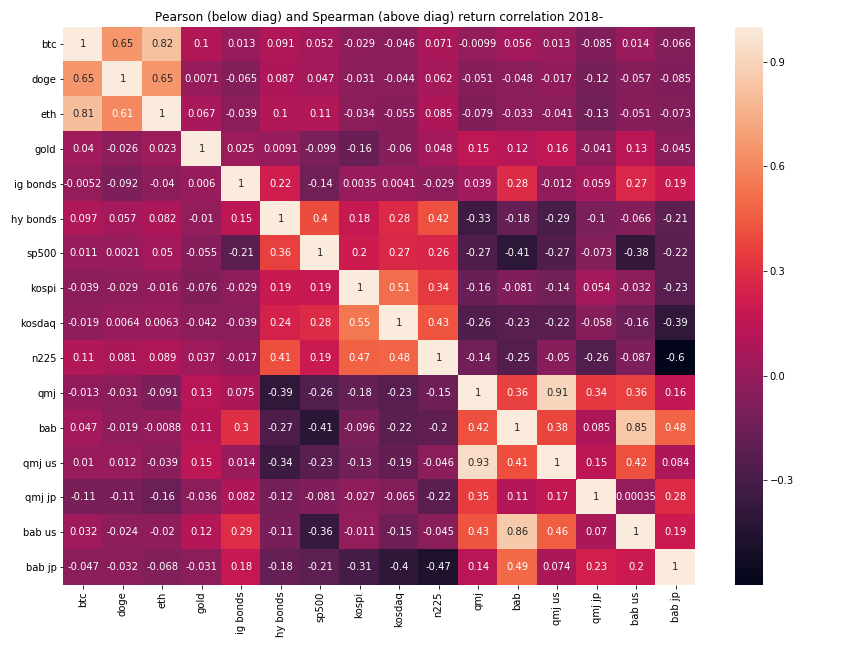 In fact, looking at the rolling correlation between Bitcoin and some of these other assets, there is little evidence of change in the correlation structure over time (with the notable exception of Ethereum): 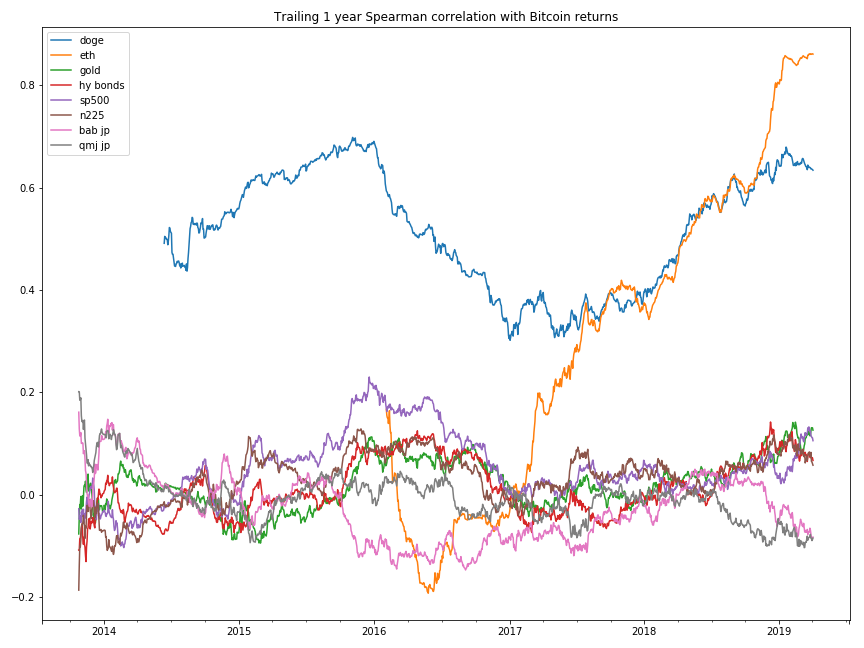 One possible concern with these correlative results is that the cryptocurrency markets could lead/lag traditional asset markets due to e.g. being less efficient. If this were true then my correlation estimates above would be artificially low: to correct for this, I looked at an alternative correlation metric that is robust to lagging. Specifically, to measure the correlation between assets A and B, I regress the (ranked) timeseries of A returns on the returns of the B, plus 1 day lagged/leading versions of B returns. The square-root of the coefficient of determination for this linear model is our lag-robust correlation metric. For ease of interpretation, I choose the sign of the square root to match that of the Pearson correlation betweeen A and B returns.

The results of this analysis are rather interesting: Bitcoin exhibits a small positive loading on US QMJ, which is not shared by the other two cryptos. Although all three cryptocurrencies have a negative loading on Japanese QMJ, Dogecoin and Ethereum get substantially more negative coefficients. (The QMS pattern repeats in the BAB equivalents.) We also see Ethereum and Bitcoin pick up a positive correlation with the gold price, and this correlation is not shared by Dogecoin. 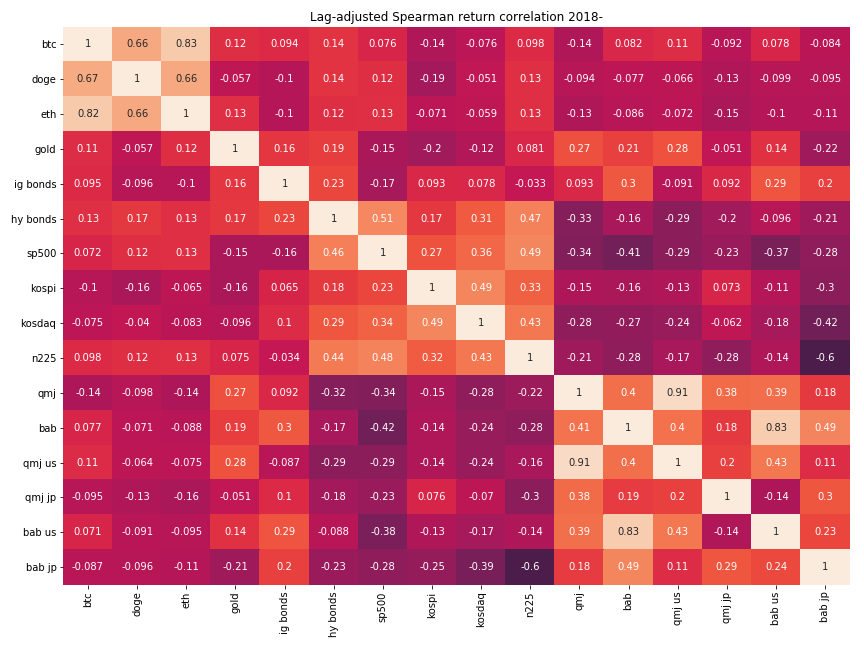 Overall it seems that there is hope here for those who are bullish on Bitcoin because they believe it is a new safe-haven asset. This is an argument that I am sympathetic to:

Does crypto have value other than as a store of value? Personally, I have a hard time seeing a strong case here. Focusing on store-of-value applications, the game theory suggests that – in just the same way that gold outcompeted silver as a global store of value – a single cryptocurrency should take ~100% market share. It also seems very likely that if any cryptoasset reaches this point, it will be the coin with the best “brand name” i.e. Bitcoin. I therefore think that Bitcoin is the only worthwhile cryptocurrency investment, and expect that the returns to holding non-Bitcoin cryptos should be zero or negative on average.

Is this thesis strong enough to justify a big position in Bitcoin? While the coin has conceptual potential as a store of value, and this potential is somewhat supported by the correlative evidence, the Dogecoin correlations are clear evidence that most of what happens to Bitcoin value is still being driven by idiosyncratic demand/risk factors unrelated to my thesis, but rather related to the success of cryptocurrency as a whole. Because I’m not optimistic about the prospects for the asset class, and Bitcoin’s price is mostly being driven by systematic risk to crypto, I have cut my Bitcoin position significantly.